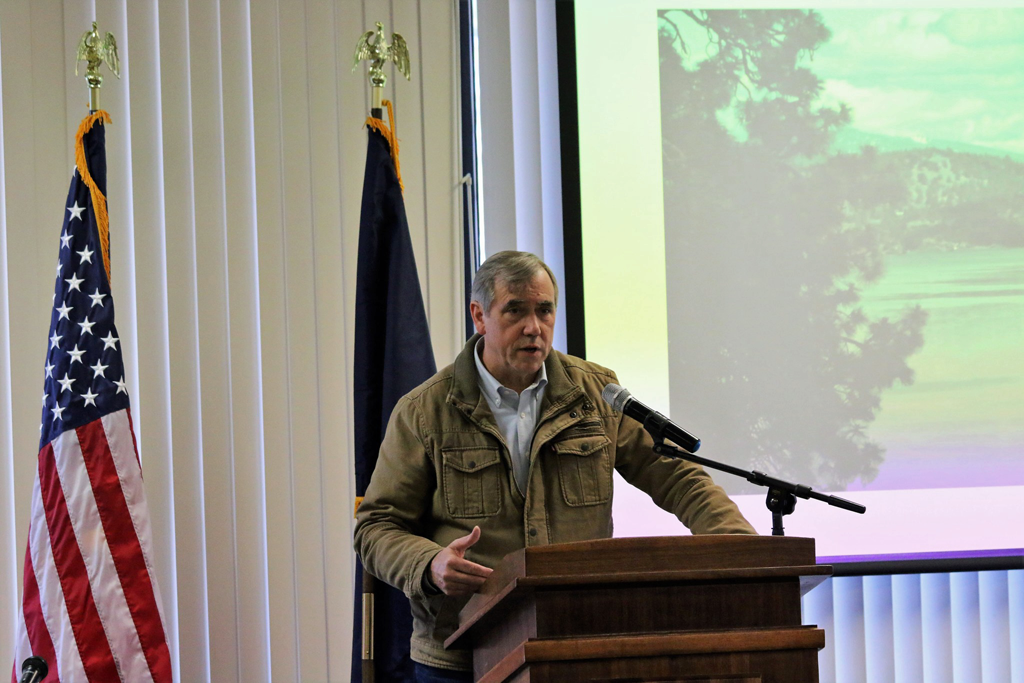 KLAMATH FALLS, OR – Oregon’s U.S. Sen. Jeff Merkley on Friday hosted a science summit, the Sucker Recovery Summit, to share updates on the health of the species and to discuss possible short-term options to help the Lost River (C’waam) and shortnose (Koptu) suckers survive until long-term solutions take effect.

Merkley developed the Sucker Recovery Summit after meeting earlier this year with Klamath-area stakeholders affected by water resource issues; all parties pointed to sucker survival as a critical element to water availability.

“Both irrigators and the Klamath Tribes expressed to me the desire to find collaborative solutions to water resource issues,” Merkley said. “In the face of extreme drought, suffocating wildfires, and other water resource challenges, stakeholders across the board came together to begin addressing one piece of the puzzle: endangered sucker survival.

“We all have a lot more collaboration and hard work ahead of us to solve these water challenges, but the ideas generated at today’s summit are a promising start,” Merkley continued. “I am heartened that everyone has shown tremendous willingness and openness to participating today. As irrigators, tribal members, and other stakeholders overcome obstacles to work together on this urgent issue, I am committed to being a strong federal partner and continuing to work in a bipartisan, bicameral manner to secure resources for the Basin.”

“On behalf of the Klamath Tribes, I thank Senator Merkley for his vision and commitment to hold the Sucker Recovery Summit,” said Don Gentry, Chairman of the Klamath Tribes. “The summit was an excellent forum for the scientists who participated to focus on the real problems affecting the endangered C’waam and Koptu, so very important to our people. Perhaps even more important, it provided an opportunity for the scientists to cooperatively identify and consider projects focused on addressing the complex problems threatening the very survival of the suckers. It was definitely a positive step in the right direction.”

“Agriculture has supported the recovery of suckers for over 30 years as evidenced by the sucker rearing program happening within the Klamath Drainage District,” said Scott White, Executive Director of the Klamath Water Users Association. “We applaud Senator Merkley’s effort to create a venue to evaluate the latest information and ensure that no stone is going unturned.”

“Modoc Point Irrigation District is the ONLY Off-Project irrigation district in a critical restoration area with the opportunity for a broad range of improvements through irrigation modernization—water conservation, water quality, riparian improvements, renewable energy, irrigation management, as well as pilot project methodology that combines interests that satisfy goals of the Klamath Tribes, restoration groups, and irrigators,” said Mason Terry with Modoc Point Irrigation District. “Our work is a real win-win situation for all stakeholders including the C’waam, Koptu and return of the salmon, and sharing this information with a broad range of stakeholders at Sen. Merkley’s summit was invaluable.”

“The current focus on meeting Upper Klamath Lake levels and Iron Gate flow releases—a paradigm that has been adhered to for two decades—is failing. ESA-listed suckers and Coho salmon populations are not responding, and our local agricultural economy is unraveling,” said Derrick DeGroot, Chair of the Klamath County Commissioners. “We appreciate Senator Merkley’s leadership on this important issue, and believe this workshop is an important step towards finding new and creative ways to provide for self-sustaining sucker populations.”

Currently, juvenile suckers in the Klamath Basin are not surviving—creating crisis conditions for the Klamath Tribes, for whom suckers are essential tribal treaty resources, and for farmers and ranchers, whose irrigation supply is affected by the need for in-stream water for the fish, which are protected under the Endangered Species Act.

With separate efforts underway to address this issue, Merkley convened the Sucker Recovery Summit so that stakeholders could compare and combine information and develop solutions. He asked experts to come prepared to discuss short-term solutions that could be implemented in the next 1 to 3 years, to help suckers survive until long-term solutions take effect.

After hearing from panels of experts and scientists, Merkley identified several action items:

Last month, Merkley worked with his colleagues Sen. Ron Wyden and Rep. Greg Walden to successfully include in the Water Resources Development Act drought relief language to assist Klamath Basin farmers who have been hard-hit by drought in recent years. The language is essential for the irrigators to effectively use $10 million in drought relief funds that the lawmakers secured in 2018.

The language authorizes the U.S. Bureau of Reclamation to work with farmers to develop and implement strategies to align water demand with available supply. It also authorizes the Bureau to develop a plan to provide reduced-cost power for irrigation, with a preference for efficiency, conservation, and local renewable energy projects. Merkley also won an irrigated pasture waiver so that Upper Basin ranchers would have access to some relief funding.

Earlier this year, Merkley used his seat on the Senate Appropriations Agriculture Subcommittee to secure $4 million in 2019 spending bill to support strategies to restore fish habitat and scale up ongoing efforts to restore healthy populations of shortnose and Lost River suckers.

And the senator is working with Wyden to push Department of the Interior Secretary Ryan Zinke to restore $500,000 to the Klamath Tribes in already allocated funding for water quality research—critical in the effort to save suckers for the sake of both tribal treaty rights and irrigation uses.