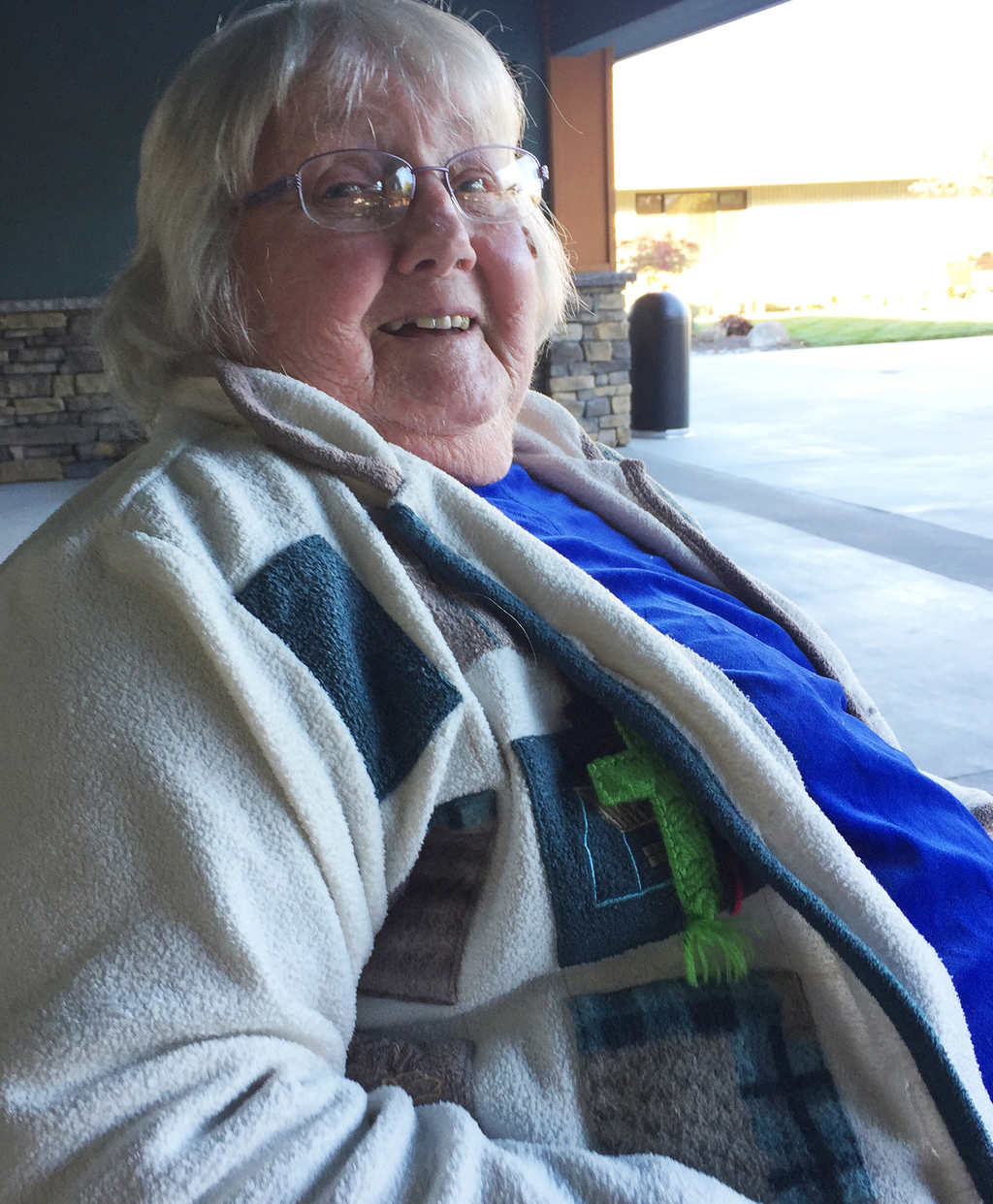 A big birthday celebration on this afternoon at 2:30pm at Columbia Basin Care, 1015 Webber St in The Dalles. That’s because Laura Ashbrenner is celebrating her 104th birthday.

In 1914, as the world was rocked with the eruption of World War I, Laura Ashbrenner was quietly born in Battleground, Washington.

She attended Oregon School of Fine Arts, and built a career as an artist for advertising agencies. In the 1930s and 40s she worked as a fashion illustrator for top Portland retailers, including Meier & Frank department stores, Charles F. Berg Company, and Lipman Wolfe department store. Her work frequently appeared in the Oregonian and The Oregon Journal newspapers.

“She says that a lady came to see her from New York and told her that she should be working in New York,” recalls Janet Meader, Laura’s daughter. “Instead Mother married my father and moved to Wishram, Washington.”

Laura and Edgar (Ed) were married 76 years. The couple had three children (Vern, Janet, and Marcie) and raised their family in The Dalles, Oregon. Ed passed away in 2013 at the age of 106.

Known as sweet-natured and quiet, Laura continues to paint and frequently takes part in art activities at Columbia Basin Care, a care facility in The Dalles, where she has lived for many years.

Back in 2010, your news editor had the chance to interview Laura and Ed for The Dalles Chronicle. The story appeared January 29, 2010. We reprint that story by kind permission of The Chronicle

Elaborate planning can be fun and lead to a richly satisfying and meaningful wedding, but don’t worry if time and resources won’t permit it.
Long-term success in marriage can start with a hectic beginning.That’s what happened with Ed and Laura Ashbrenner of The Dalles. Their wedding was planned in just over 48 hours and had some unusual complications, but the couple celebrated 72 years of marriage in December.He turns 102 in March; she’s 95, and they live in the same home they moved into in 1956.Originally he was from Vancouver and she was from Battleground.

They met at a barn dance. She later admitted she thought he was cute, but he was with another gal, and she was with another guy.The next step was a double date, still both with other people, leading Ed to say, “I didn’t go out with her the first time we went out.” That soon changed, and eventually he proposed.”He asked me to come cook for him,” Laura remembers.But the country was in the grip of the Great Depression, and they couldn’t afford to get married for seven more years.The courtship may have been long, but the wedding preparations were a whirlwind.Laura was living with her parents in Vancouver when she got the letter on Friday, Dec. 10, 1937.”It said ‘If you still want to get married, I’m coming down. I’ll be down tomorrow’- which was Friday,” said Laura.

“After I read the letter, I went into Vancouver and bought a dress, got a cake, invited the people, saw the pastor and got a lady to sing.” In the meantime, Ed had driven to Vancouver to buy a new shirt and hat for the wedding. He picked her up at noon and they headed to the courthouse to get a marriage license, only to find the Clark County courthouse closed for the day.Someone suggested they go to neighboring Skamania County, and get their license there.The eager couple arrived in Stevenson only to find the county clerk not in her office.”We were looking all over town for the county clerk, and they were telling her that we were looking for her, so she was looking for us and we were looking for her,” Laura said. “It was almost five o’clock we finally found each other.”

That delay forced them to cancel the wedding rehearsal they’d plan for Friday night and reschedule for Saturday.When the wedding day arrived Sunday, the ceremony had to be postponed because the best man had been hauling wood and got stuck.”We finally got married, and we left my folks at mi d n i g h t, t o g o t o Wishram because he had to go to work the next day,” Laura said. “As we got over here to Crawford’s Grove, our lights went off in the car and we ran off the road into a ditch. We sat there until about 4 o’clock in the morning when a truck came along and gave us a ride to Wishram. So we had breakfast, and he went to work and I went to bed.”

That lack of an immediate honeymoon was made up many times over in the years to come.The couple visited Europe three times, as well as trips to Morocco, Canada, Mexico and Hawaii.They also house-sat for several years in the Virgin Islands.

Along the way they raised three children. He worked for the railroad for 45 years and she had a ceramics bus ines s and painted.Both of them enjoyed golf so much that they played until he was 98.Laura offered several explanations of their marriage success.”I had two older brothers and they were always teasing me,” she said. “I was used to fighting with my brothers. So after I got married, one day I felt like having a good fight. But he said, ‘We’re not going to fight.’So we never did.”

That didn’t mean a life of hearts and flowers, though.”Overlook differences, ’cause you’re going to have them,” she added.”He butters his toast over the butter and gets all the crumbs in the butter, and that’s bothered me for years. But that’s him. He’s not going to stop doing it.” Asked if Laura had any habits that bothered him, Ed diplomatically replied, “Seems like there was something, but I can’t think of it now,” adding, “I let her do most everything she wants to do.” “We’re still happy with each other – most of the time,” said Laura. “We got so used to each other we wouldn’t want to be with anyone else.”.