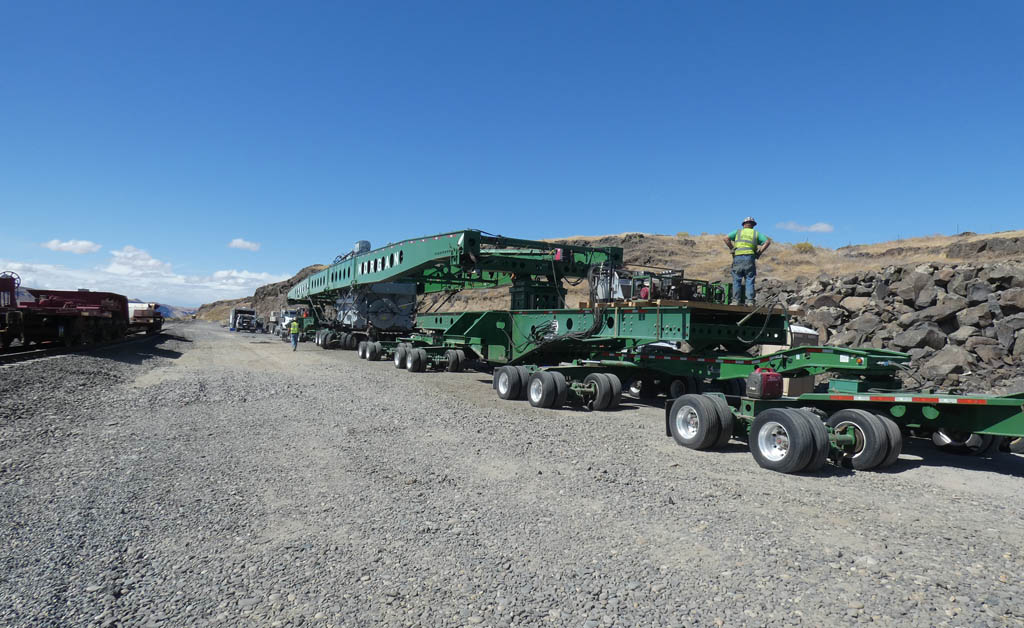 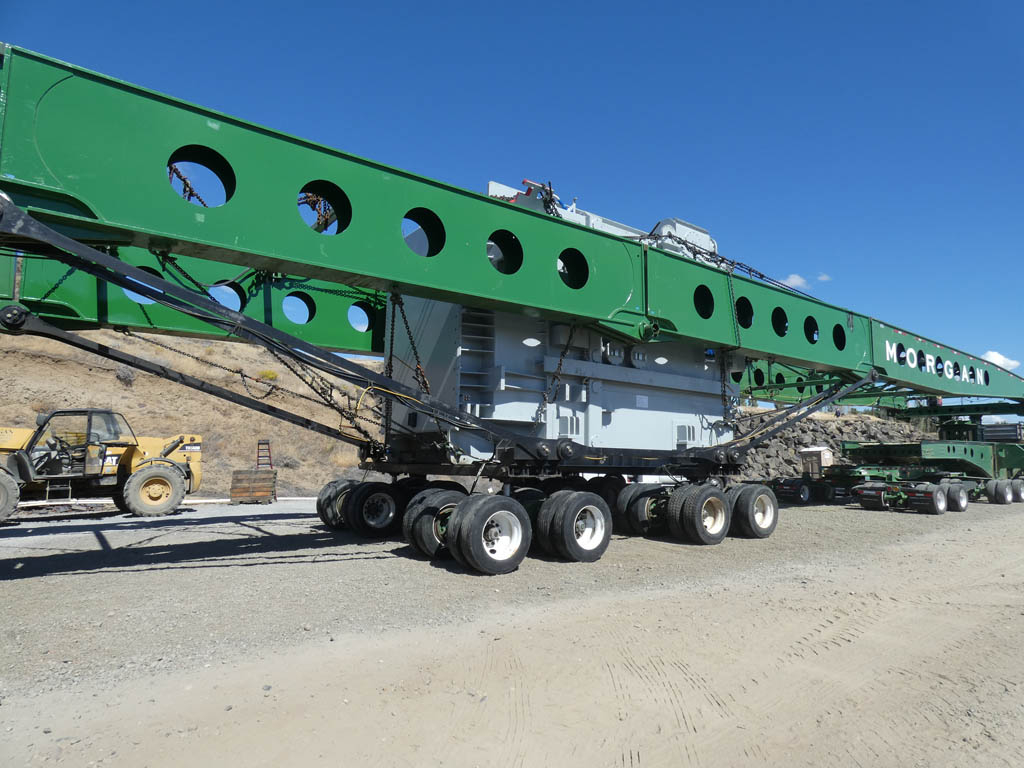 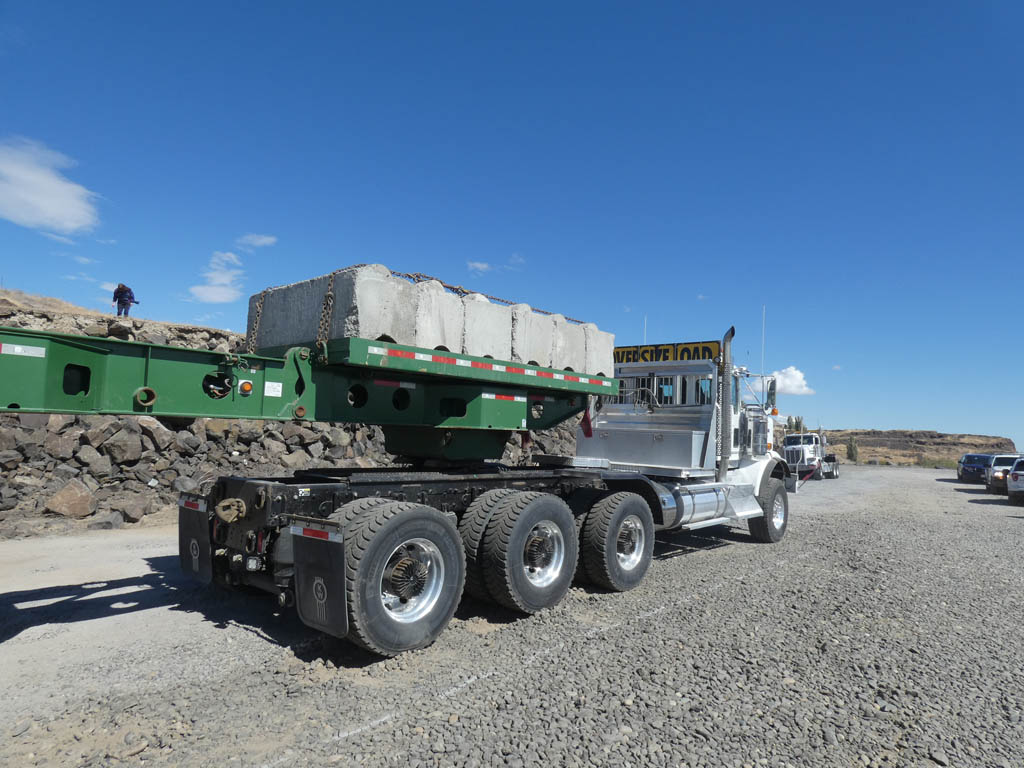 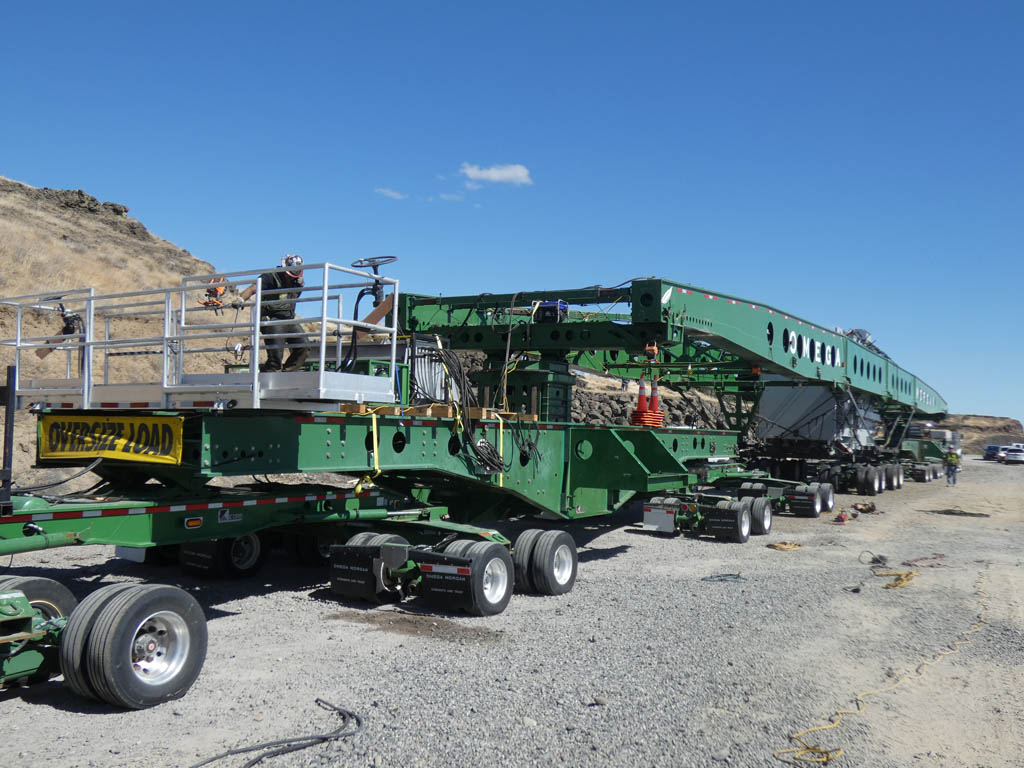 The huge rig is needed to transport  a transformer destined for the Rock Creek substation  15 miles east  of Goldendale, WA, weighing more than a million pounds. That weight requires this setup with 36 axles that is 360 feet long to distribute the weight. Each set of wheels is independently steerable so that it can be taken over the road. The transformer was offloaded from BNSF railroad car Wednesday, Sept 12, 2018 at Sunnydale Road, 28 miles east of the junction of SR 14 with Highway 97. The move is planned to start Monday, September 17 at 10 pm from the siding at Sunnydale Road west to the intersection of Highway 97 and up 97 to the chain-up area at Milepost 3, arriving at about 4 am. That will mean closing SR 14 and a portion of Highway 97 during the move. It will rest there until Tuesday night when 97 will be closed to allow for tthe transformer rig to make it to Hoctor Road, then East on Hoctor to the site.

Klickitat PUD said the transformer is for the Bonneville Power Administration and will be placed at the Rock Creek substation, located about 15 miles east of Highway 97 on Hoctor Road. We have a call in to BPA for more information, which we will post here when we get it.

The Bonneville Power Administration says this is not the first transformer of this size in the state, that it is intended as a backup for a transformer of equal size already installed at the Rock Creek substation.

A spokesman said it is part of BPA’s long term emphasis on reliability  to have backups in place, because it can take months to order a transformer of this size, have it manufactured, shipped to the site and be installed. With a backup on site, the switchover can be made in a matter of hours.

These are step-up transformers that convert electricity generated by several wind farms into high voltage for transmission on the electrical grid.

This particular one was manufactured in South Korea, shipped to Longview where it was loaded on a BNSF train for transport up the Columbia River Gorge to the Sunnydale Road site where it was offloaded onto the setup shown above.  A worker at the site said the process took a day, part of that cutting through the welds that held it on the railcar for stability’s sake.

The WSP sent out the information below on Thursday afternoon:

From 10 p.m. Tuesday, Sept. 18 until 4 a.m. Wednesday, Sept. 19, both directions of US 97 between the SR 14/US 97 interchange and Hoctor Road in Goldendale will have intermittent closures with flagger-controlled traffic.

Moving one of the largest pieces of commercial equipment in state history is no easy task, and has been scheduled overnight to reduce the effect on traffic. It requires careful planning and choreography between all the agencies involved. We’ve also ensured that emergency response vehicles will be able to get around the load.

WSP troopers in partnership with Klickitat County Sheriff’s Office will escort the trailer and transformer from the city of Roosevelt to its final destination on the Goldendale windfarms Rock Creek Substation.

To hear our interview with Trooper Will Finn and Commercial Vehicle Enforcement Officer 2 Jeff Macchione, click on the grey podcast bar below