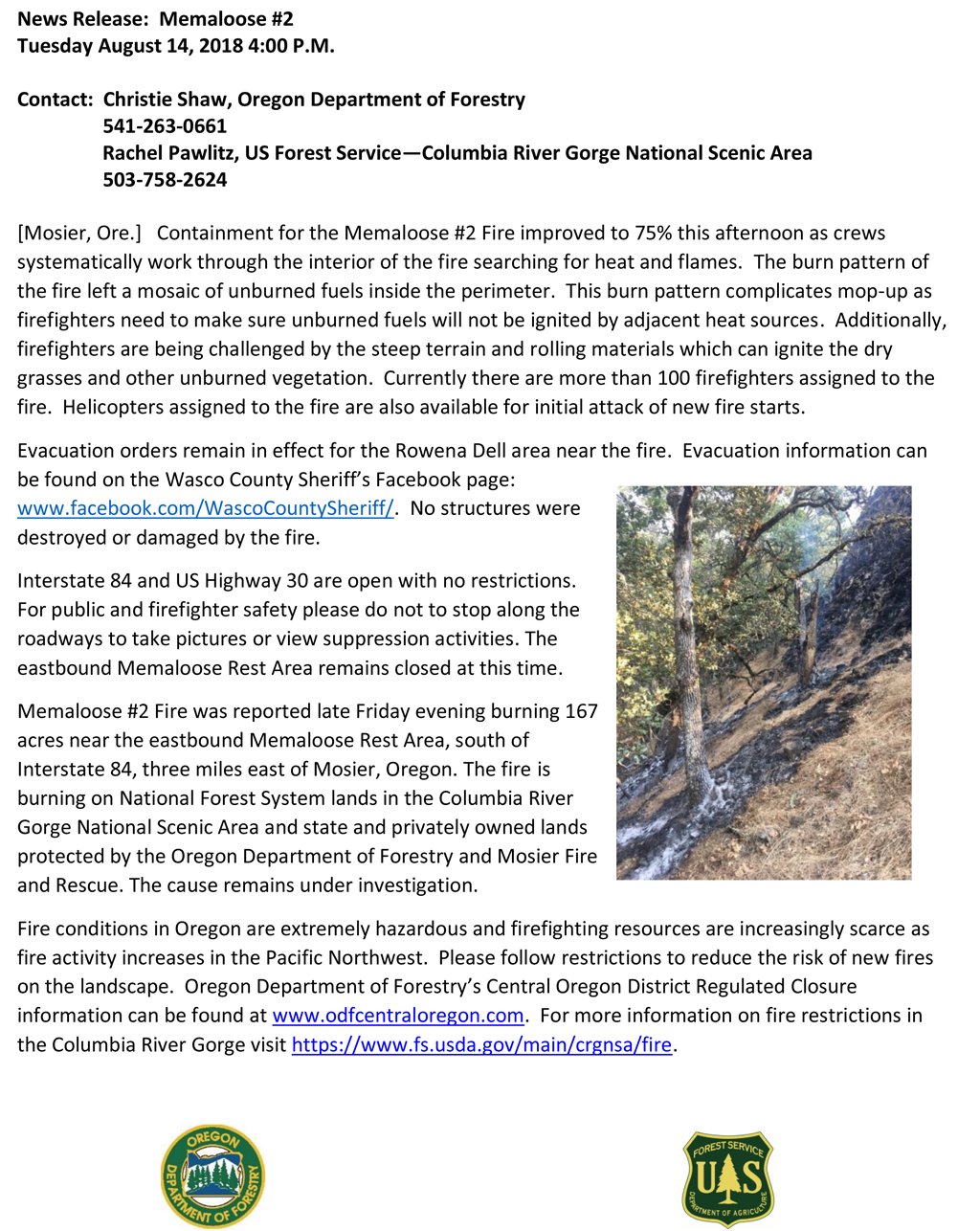 Note: this was intended for release Monday at 4 pm but an email glitch kept it until late Monday night

[Mosier, Ore.]   Fire crews continue to make good progress on the 167 acre Memaloose #2 Fire.  Today containment improved to 65%.  More than one hundred firefighters are working on the fire under the direction of the Oregon Department of Forestry and the U.S. Forest Service Columbia River Gorge National Scenic Area.  Personnel includes hand crews, fire engines and tenders, as well as two helicopters.  These firefighters are systematically working the interior of the fire looking for burning fuel and hot spots, then following up by dousing with water and digging into the ground to make certain there is not burning material under the earth.  Crews will remain on scene in coming days until there is no risk of fire spreading outside the fireline.

Evacuations in the Rowena Dell area near the fire have been reduced with the improved containment.  All the Level 2 (GET SET) evacuation areas have been reduced to Level 1 (Get Ready) and Level 1 evacuations have been removed.  Updates for evacuation levels can be found on the Wasco County Sheriff’s Facebook page:  www.facebook.com/WascoCountySheriff/.  No structures were destroyed or damaged by the fire.

Interstate 84 and US Highway 30 are open with no restrictions.  For public and firefighter safety please do not to stop along the roadways to take pictures or view suppression activities. The eastbound Memaloose Rest Area remains closed at this time.

Memaloose #2 Fire was reported late Friday evening burning near the eastbound Memaloose Rest Area, south of Interstate 84, three miles east of Mosier, Oregon. The fire is burning on National Forest System lands in the Columbia River Gorge National Scenic Area and state and privately owned lands protected by the Oregon Department of Forestry and Mosier Fire and Rescue. The cause remains under investigation.

Fire conditions in Oregon are extremely hazardous and firefighting resources are increasingly scarce as fire activity increases in the Pacific Northwest.  Please follow restrictions to reduce the risk of new fires on the landscape.  Oregon Department of Forestry’s Central Oregon District Regulated Closure information can be found atwww.odfcentraloregon.com.  For more information on fire restrictions in Columbia River Gorge visit https://www.fs.usda.gov/main/crgnsa/fire.

The intersection of State Road and Marsh Cutoff to Dell Road. This includes both sides of the road.

The intersection of Highway 30 and Marsh cutoff all the way east to the bottom of the Rowena loops, this includes both sides of the Highway 30, Rowena Dell, Rowena Overlook, Canyon Way all the way down to Rowena Ferry Road.

The Sheriff has also lifted the previously in place Level 1 evacuation notice that was in place. The following have no evacuation level at this time:

Starting at the bottom of the Rowena Loops heading east to the west end of Tooley Lake, both sides of Interstate 84 and both sides of Hwy 30 as well as Mayor State Park.

Stay vigilant as fire crews are still in the area working on fire suppression efforts. 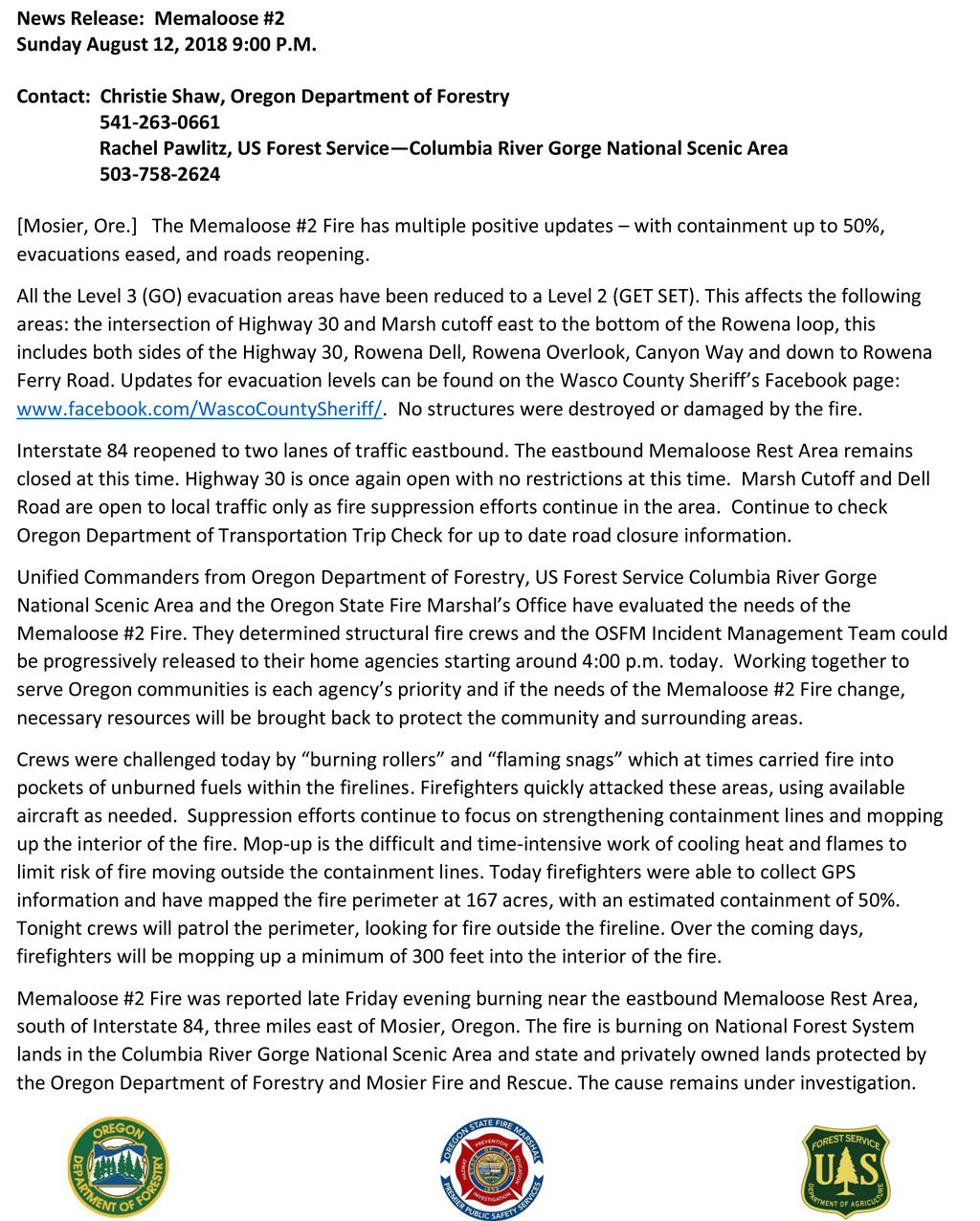