VANCOUVER – U.S. Representative Jaime Herrera Beutler applauded Governor Jay Inslee for speaking out against Oregon’s plan to toll commuters at the Washington-Oregon state line while he was in Vancouver today. The governor made his remarks at the Port of Vancouver’s celebration of the completion of the West Vancouver Freight Access Project, an event where the governor and Jaime were featured speakers. 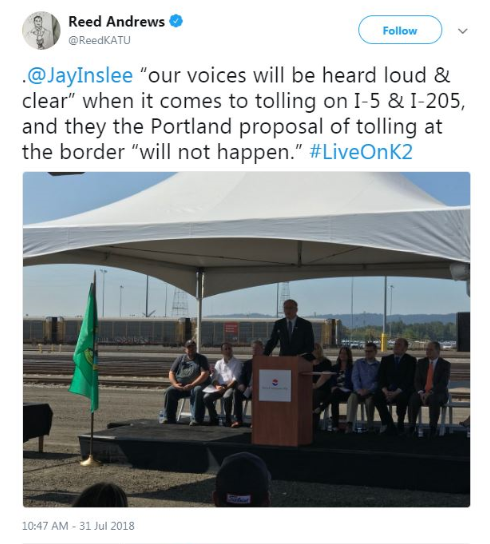 “I’ve been urging Governor Inslee to take a public stand alongside me against unfair tolling that would penalize Washington commuters once they crossed the state line, and I welcome his partnership and his strong statement today,” said Jaime.

“Oregon is moving ahead swiftly with plans for tolling on all lanes of I-5 and I-205 once cars cross the river – either immediately, or phased in over a few short years – but they have no plans to improve those roadways that carry so many Southwest Washington citizens to and from work each day. Sitting quietly by and hoping Oregon chooses to reverse course without vocal input from elected leaders is simply not going to work. As Governor Inslee said, we will be loud and clear in standing up for those we represent when it comes to tolling. Defending working class Washington residents is not a Republican or a Democrat issue, it’s what elected officials are supposed to do, and I hope more of our colleagues who represent this region join us and publicly weigh in against Oregon’s plan.”