Dufur, Oregon – Although temperatures have been high and relative humidity low, there has not been a significant growth in fire acres over the last two days. On Sunday, firefighters continued to improve fire perimeter lines. The estimated containment is 58% and 34,550 acres.

On Monday, firefighters will continue to patrol, hold and improve existing hand and dozer line along all divisions of the fire. Fire personnel resources are slowly being released as the fire activity decreases.

Evacuations notifications will continue to be monitored and disseminated from Wasco and Sherman County Sheriff Departments.

Visitors, as well as locals, should always be aware of potential hazards when moving through recently burned areas. Burned area hillsides can become unstable due to loss of vegetation. Burn scar areas are susceptible to rapid soil and debris movement when precipitation occurs.

As summer progresses, increasing and prolonged temperatures are drying grass, brush and trees, we ask the community and visitors to stay particularly vigilant in being fire safe. Dragging trailer chains, leaving campfires unattended, parking in dry grass, discharging firearms or fireworks, tossing cigarettes, and using mechanical equipment without spark arrestors are all known causes of wildfires.

As of Sunday night, the Long Hollow Fire was reported at 58 percent contained with acreage holding at 34,500. Evacuation level for segment three of Deschutes Canyon from Buck Hollow to Macks Canyon has been dropped from a Level Three Go Now to a Level 1 Be Ready. Oregon 216 and the Deschutes access roads have been reopened. The historic Ferry Canyon Homestead, used for railroad workers in the early 1900s was burned down and is now listed as a hazardous area. Below is the Sunday morning update: 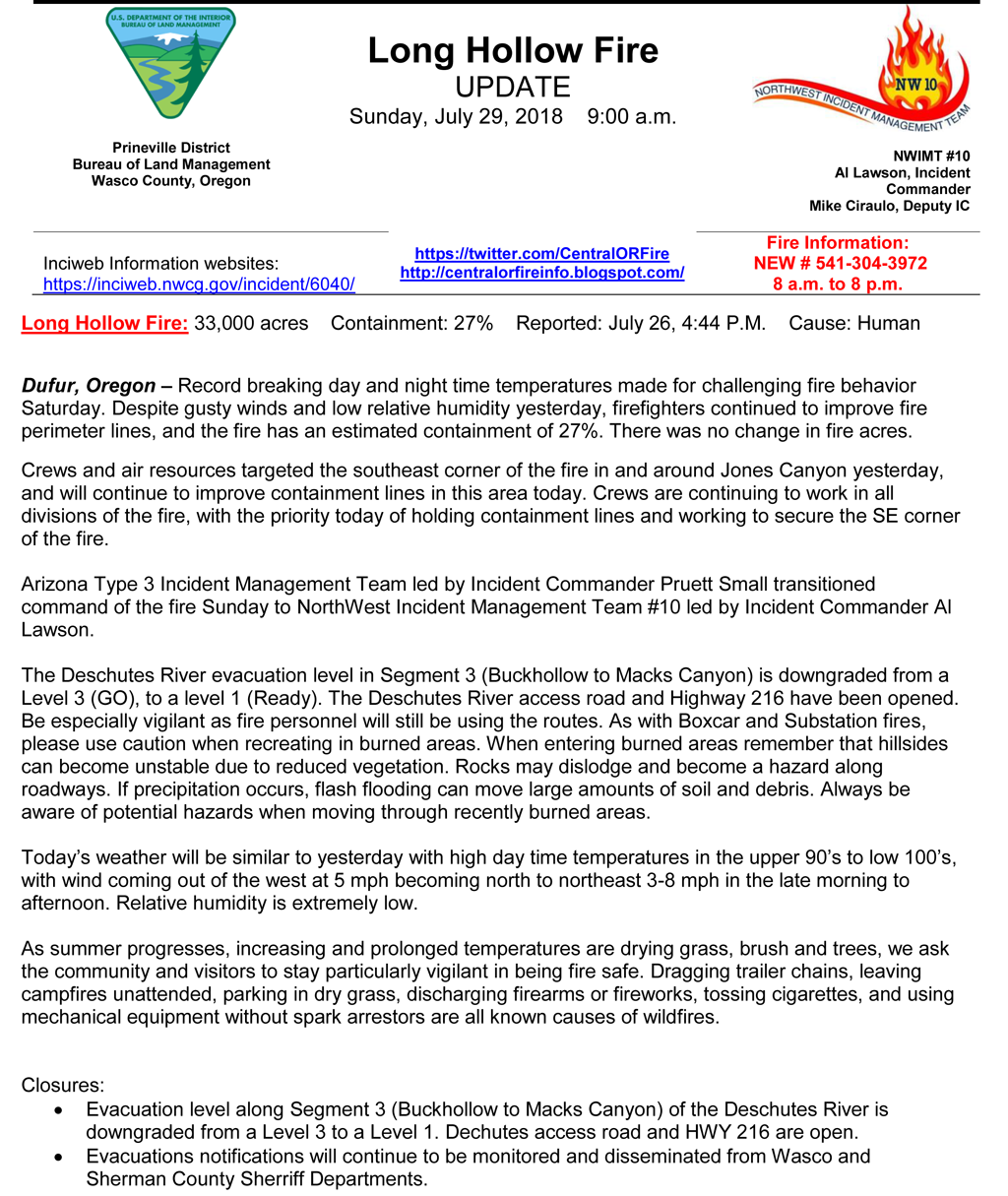 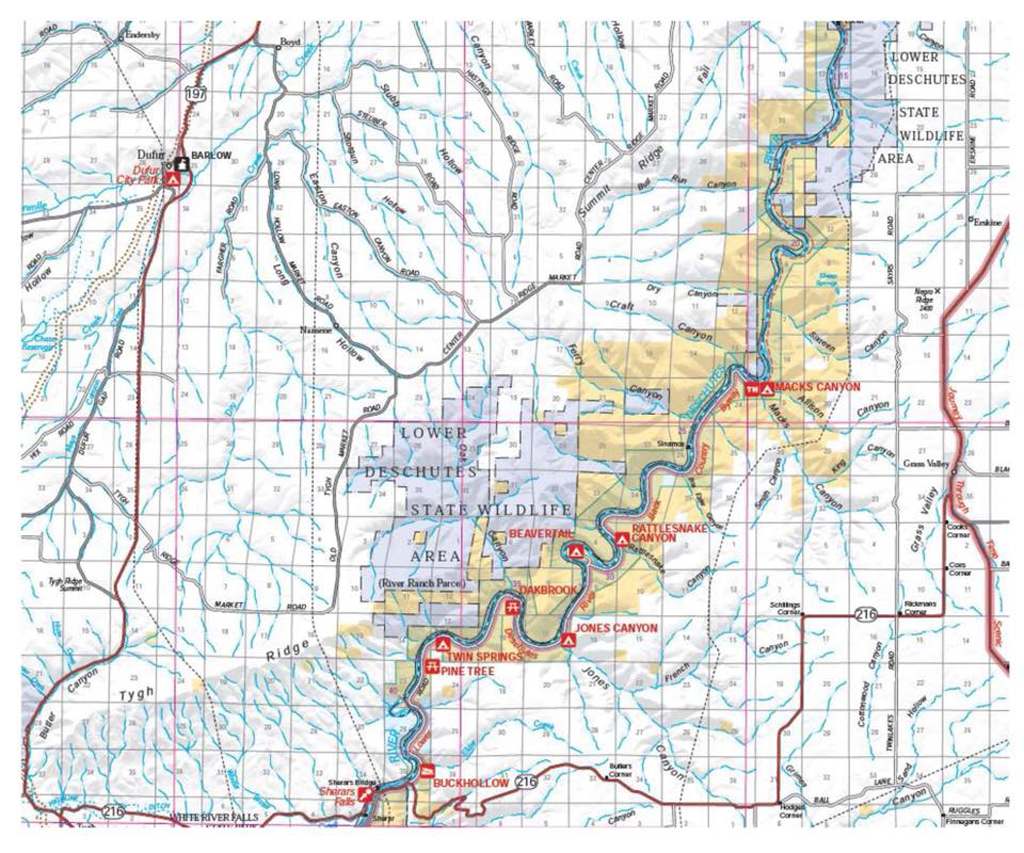 Limited Deschutes River access right now during #LongHollowFire. No public access of any kind is allowed in Segment 3 (Buckhollow to Macks Canyon). Boaters in Segment 4 can stay on river but there is no road access from Hwy 216 north to Macks Canyon.

Redmond, ORE. — A grass fire southeast of Dufur, Ore. first reported yesterday around 4:30 pm quickly spread yesterday afternoon and evening. As of 2 am this morning the fire size is estimated at 15,000 acres. It’s now called the Long Hollow Fire.

Officials say the fire has burned structures, but they aren’t sure how many.

The fire has reportedly burned down to the Deschutes River, prompting Level 3 evacuation orders yesterday afternoon from Wasco County. The area under evacuation is from Sherars Falls to Mack’s Canyon. Follow Wasco County Sheriff’s Office on Facebook for updated emergency information:  https://www.facebook.com/WascoCountySheriff

Both the cause of the fire and any structural damage it has caused so far are under investigation.

A Type 3 Incident Management Team will take command of the fire this morning and continue working to suppress the fire as quickly as possible. Expect to see more resources arriving today and more fire suppression activities throughout the day.

For more updates, check our Central Oregon Fire Information blog at http://www.centraloregonfire.org or follow us on Twitter @CentralORFire

DUFUR, Ore. —A new wildfire that started yesterday afternoon near Boyd has now grown to 6300 acres and The Wasco County Sheriff’s Office issued a Level 3 evacuation order is along the Deschutes from Sherars Falls to Macks Canyon. Level 3 means go now. The fire, officially called the Long Hollow Fire, was reported at about 4:30 p.m. The fire has come close to the river, but so far it hasn’t jumped it. But if it does, it will meet already scorched earth from the devastating Substation Fire, which burned more than 70,000 acres of land that included crops. The Bureau of Land Management has sent two single-engine air tankers, three heavy tankers, two helicopters, five engines and Type 2 hand crews to battle the blaze. Just before 10 pm last night, Burlington Northern railroad announced it will be providing a fire train that is equipped with over 60,000 gallons of water and cannons to run alongside the Deshutes River, the goal being to put the fire out as it crawls down the canyons.