The following is a press release from Oregon State Sheriff’s Association: 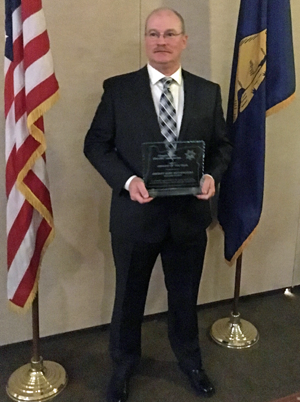 Gary Bettencourt has proven to be a leader within OSSA. He took on the leadership role at OSSA by going through the elected positions to become president of the organization. He has always been involved with OSSA from the start of his career as an Oregon Sheriff, which is not the easiest thing to do when you come from a smaller county. He does not have the resources that larger counties have, including personnel, so for him to be involved to the level he is, shows true dedication to our organization.

Gary has consistently been involved over the years and that is what it truly takes to be a leader. He understands and is committed to mental health issues around the State and represents OSSA on numerous committees, and again, has been involved from the beginning.

Gary helped start several activities for OSSA. He donates his time and effort to make these a success in our organization. Over the years, our injured deputies and their families have benefited from his involvement. Gary is involved with the Western States Sheriffs Association, and understands the relationships between our State and other Western States and the importance of a consolidated voice when it comes to issues with federal entities and travel management plans.

Gary demonstrates high moral ethics, integrity, and credibility in his daily life and sees the bigger picture of being a Sheriff through his daily actions. He is one of our unsung heroes of the Oregon State Sheriff’s Association.