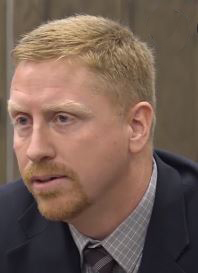 The Dalles businessman Daniel Bonham was appointed Monday by a vote of Wasco, Jefferson, Deschutes and Wheeler county commissioners to serve out the Oregon House District 59 term of John Huffman, another The Dalles resident who recently resigned from the position.

Bonham, 40, owns a stoves and spa business and and will fill the remainder of Huffman’s term in office after Huffman vacated the seat to accept a federal appointment.

He was chosen over Jefferson County Commissioner Mae Huston of Culver and a third nominee chosen by GOP precinct committee members, Bob Perry of Redmond.

County commissioners and judges from Deschutes, Jefferson, Wasco and Wheeler counties asked each nominee about a dozen questions at a special meeting Monday afternoon in Madras.

Some commissioners expressed interest in appointing someone who would stay in the position long-term, like predecessor Huffman, something Bonham showed the most interest in.

“I think John (Huffman’s) initial thought process, John’s commitment to 10 years, I think is realistic. I think that’s fair,” Bonham said. “I wouldn’t want to say longer than that, but I think that would be a good term down in Salem to be effective.”

Perry said, “I’m a big term-limit guy myself. I can’t see myself doing this for a long period of time. So if that’s a problem with you, that’s fine.”

Huston said, “Two years, four years, but beyond that I really couldn’t say. And I do think that John Huffman getting on the committees increased his effectiveness a little. Longevity is good.”

All the nominees spoke very highly of each other. Bonham said any one of them would be a good choice, but pointed out Huston and Perry are already active in the political landscape.

“Involving me in this process and sending me to Salem gets a third person involved that’s not involved currently,” he said.  “I think (I) will be someone that has a strong voice and someone who’s got a lot of energy and passion for the state of Oregon and our district.”

“It is truly an incredible honor to have the opportunity to represent my friends and neighbors as their state representative in Salem,” Bonham said in a statement issued by Oregon House Republicans. “I am humbled to have earned the support of Republican precinct committee persons, as well as the county commissioners.

“While I know I have big shoes to fill, I believe my desire and passion for helping people, in conjunction with my business background, will make me an effective leader in Salem. I am excited to get to work on behalf of the residents of House District 59.”

He and his wife, Lorilyn, are active volunteers in The Dalles community. In 2014, they rejuvenated The Dalles Booster Club, raising more than $100,000 in two years to enhance the high school athletic experience for local student athletes. They are also active in their local church and have participated in recent mission trips to Guatemala and Thailand.

“Daniel’s background as a small business owner and leader in his community will make him a great addition to the Legislature,” said House Republican Leader Mike McLane, R-Powell Butte. “House Republicans are excited to welcome him to our caucus and look forward to serving alongside him.”

The Bonhams have lived in The Dalles for the last decade. Together, they have two children, Jennifer and Jack.