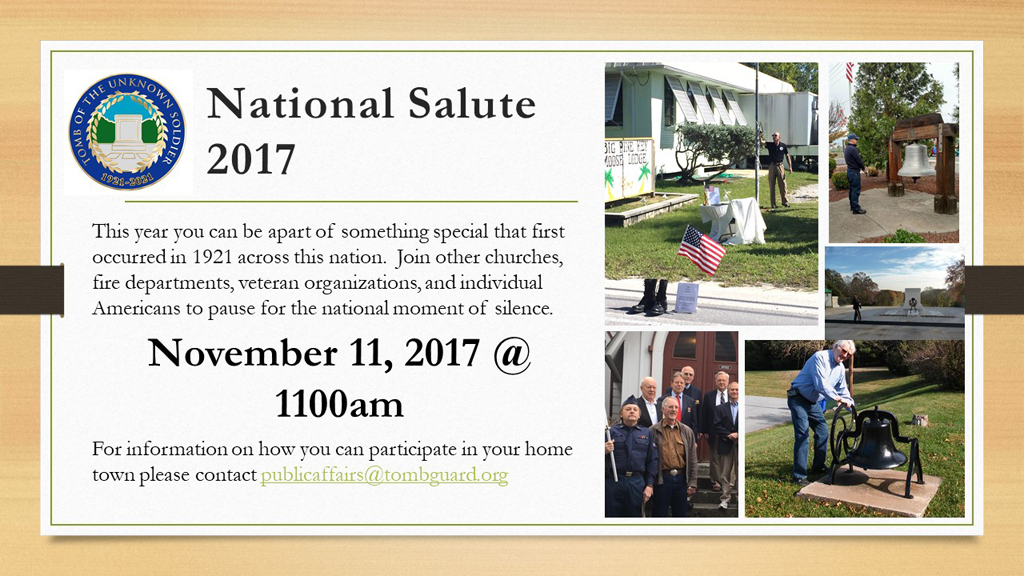 The Society of the Honor Guard Tomb of the Unknown Soldier (SHGTUS) Centennial Committee is proud to announce the continuation of one of the many projects currently under development as we approach the 100th Anniversary of the burial of an Unknown American Soldier who fought and died in World War I, and is buried in the Tomb of the Unknown Soldier in Arlington National Cemetery. That centennial will take place in 2021.

This year, as part of the annual celebration, members of St. Paul’s Episcopal Church in The Dalles invites everyone to join them at 10:30 am Saturday Nov. 11 for a short Veterans Day service at ht Union Street Chapel next to The Dalles City Park at 5th and Union.That will be followed by  participation in the National Salute to include ringing the bell (21 chimes) at 11:11:11 am on 11/11/2017.

OPENING: 21 Count Honors (five second interval between counts) — by all available means — gun salute (land and sea), church bells, rifle salute, police and fire dept. sirens, etc. This calling to “Attention” of the freedom loving people of the World for purposes of rendering the highest honors to those American’s who have paid the ultimate price for freedom. All military installations on land, at sea and in the air will use what ever means they have to celebrate and honor those who have given their life for this country. Likewise, other
organizations are invited to pay respects to the honored dead. Religious organizations, patriotic organizations, scouting organizations, schools, communities, libraries, industrial and business entity of all sizes, unions, communications media, social media, transportation services and individuals across the land are invited to participate in these highest honors. The idea is for the American people to pause, show their gratitude and render their highest honors to the people’s unsung valor.

RECOGNITION: Great Silence – for two minutes, the first minute for those who have already sacrificed and the second minute for those who will sacrifice in the future with their lives for the American way of life. This two-minute silence ceremony is a reenactment of the respect shown by our nation during the establishment of the Tomb of the Unknown Soldier on the 11th hour, 11th day, 11th month, 1921. It is a universal feeling for those who gave their all and for whom we can never fully repay. It is a grateful nation pausing to honor our Nation’s promise to never ever forget or to forsake America’s glorious and immortal dead and missing. It is a centennial commemoration due those who “gave their tomorrow for our today.”

ENDING: Taps – The sounding of Taps across the nation and around the free world for one minute. This easily recognized emotive and powerful twenty-four notes bugle call is the international melody for “lights out” — final resting for deceased soldiers. This synchronized playing of Taps around the free world by individuals and organizations is a solemn calling for the defense of free peoples worldwide.

The President of the Society of the Honor Guard of the Tomb of the Unknown Solder is Sgt. Maj. (ret) Gavin McIlvenna of Hood River, who will be present for the service in The Dalles.