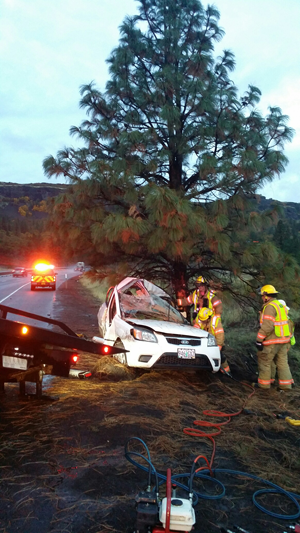 On October 22, 2017 just before 6:00 AM, Oregon State Police Troopers from The Dalles Area Command were dispatched to a single vehicle crash occurring westbound on I-84 near milepost 76, just west of the Rowena Exit.

The preliminary investigation revealed that a white 2011 Kia Rio sedan was traveling westbound at this location and for unknown reasons, left the roadway into the ditch, and collided into a tree. The driver and sole occupant of the Kia, identified as 18 year old The Dalles resident Aileen Pineda-Garcia, was pronounced deceased at the scene. Investigators concluded that both speed and weather were likely a contributing factor in the crash. Pineda-Garcia was confirmed to have been wearing her safety belt at the time of the crash.

Oregon State Police was assisted at the scene by Mid-Columbia Fire Department and ODOT. The crash did not inhibit traffic flow and there were no road closures as a result.